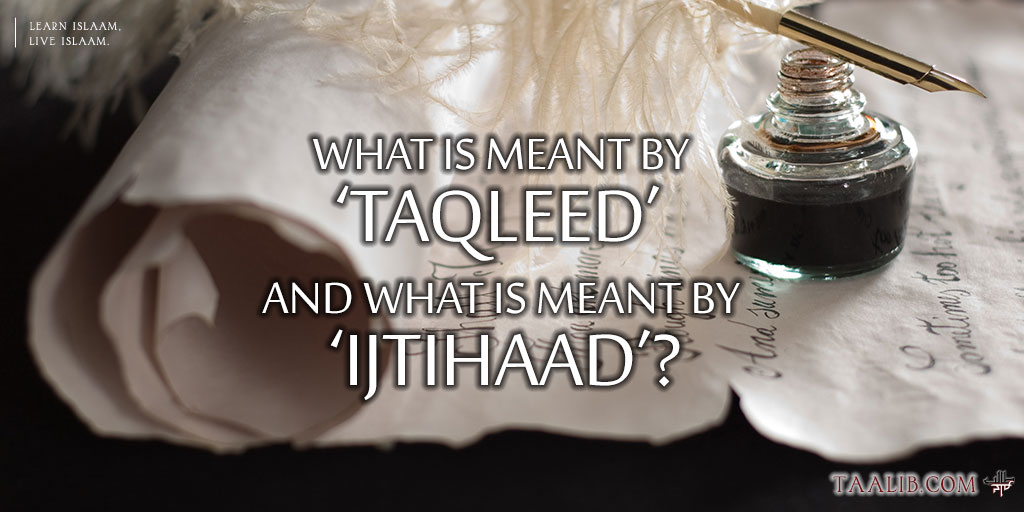 Imaam Muhammad ibn Saaleh al-‘Utheimeen, may Allaah have mercy upon him, was asked,

“Indeed, Allaah hears our supplications, may Allaah bless you. A listener from Pakistan says, “Esteemed Sheikh please inform us about the concept of ‘ijtihaad’, and the concept of ‘taqleed’. What is meant by ‘taqleed’ and what is meant by ‘ijtihaad’? Was the practice of ‘taqleed’ present in the age of the Companions and the generation after them that of the Successors to the Companions, did the some of them make ‘taqleed’ of others from among them in Sharee’ah rulings or not?”

‘Usul as-Sunnah’ Book 1 (The Meaning Of ‘Aqeedah Or Beliefs) – The inseparable connection between ‘aqeedah and Sharee’ah….

As for the meaning of ‘ijtihaad’, it is putting forth the effort required to independently arrive at the correct Sharee’ah ruling directly from the Sharee’ah evidences found in the Book and the Sunnah, as well as using Consensus and correct analogy. This is what is generally known as ‘ijtihaad’ and it is well known that it is not proper for someone to undertake making ‘ijtihaad’ except for the one who is knowledgeable of the methods and proper way of doing so, as well as also possessing both sufficient knowledge and proper comprehension, such that it is possible for him to have reached the level of being able to derive the proper rulings from the evidences of the sources and what they actually indicate.

As for ‘taqleed’, it means to accept the statement or ruling of a scholar who has independently derived a Sharee’ah ruling, without you having personal knowledge of its evidences. Rather you blindly accept that from him due to your holding his knowledge based statements as being reliable. And ‘taqleed’ in reality was something which occurred in the time of the Companions of the Messenger of Allaah, may Allaah be pleased them all. As indeed Allaah said: ﴾ Ask the people of knowledge if you do not know ﴿-(Surah Nahl:43).

There is no doubt that among the people in the age of the Companions of the Messenger of Allaah, may Allaah be pleased them all, up until this very age that we live in- there were and are those individuals who do not have the ability to reach the proper rulings by themselves, due to their ignorance, shortcomings, and being occupied with various affairs. Such an individual simply has to ask one of the people of knowledge about a matter. Moreover, this asking the people of knowledge requires that he accept what they inform him of regarding the ruling in such and such a matter. And this accepting of a ruling by him is clearly blind following.

Therefore based upon this we say that the one who does not have the necessary knowledge and understanding needed to arrive at the truth of a Sharee’ah ruling himself, then it is possible to reach the needed Sharee’ah ruling by blindly following someone else who is from those people of knowledge whom he has been commanded to ask, since he is not a scholar himself.

However, if it is asked by the common person ‘who then should I blindly follow?’ then the response is it is obligatory that you blindly follow the one who you believe his positions and rulings are closest to the truth. As the people of knowledge are like doctors, indeed they are the doctors of people’s hearts. Just as if one of us were to become physically sick, and there are within that land many different doctors; then he would choose the one who is the most skillful and knowledgeable of the field of medicine, its various treatments, and the remedies used. Similarly it is not sensible that someone would knowingly go to a less qualified doctor, when there was another available to him who one who is more qualified and experienced than the first, except if forced to do so by necessity.

Likewise in the matter of blind following one should select the scholar one sees as being closest to the truth in his statements and rulings, due to him being more knowledgeable of the Sharee’ah, and having more fear of Allaah the Most High and the Most Exalted. Then in this way you stand as having properly complied and obeyed the command of Allaah, the Exalted in His statement ﴾ Ask the people of knowledge if you do not know ﴿-(Surah Nahl:43). 1

The short URL of the present article is: https://taalib.com/TqYsm
Tags: ‘ijtihaadal-'UtheimeenCompanionstaqleed
ShareTweetPin

Undoubtedly, I Say The Same Thing As Imaam Ash-Shaatibee