Three Guidelines to Remain Guided and Not Go Astray! 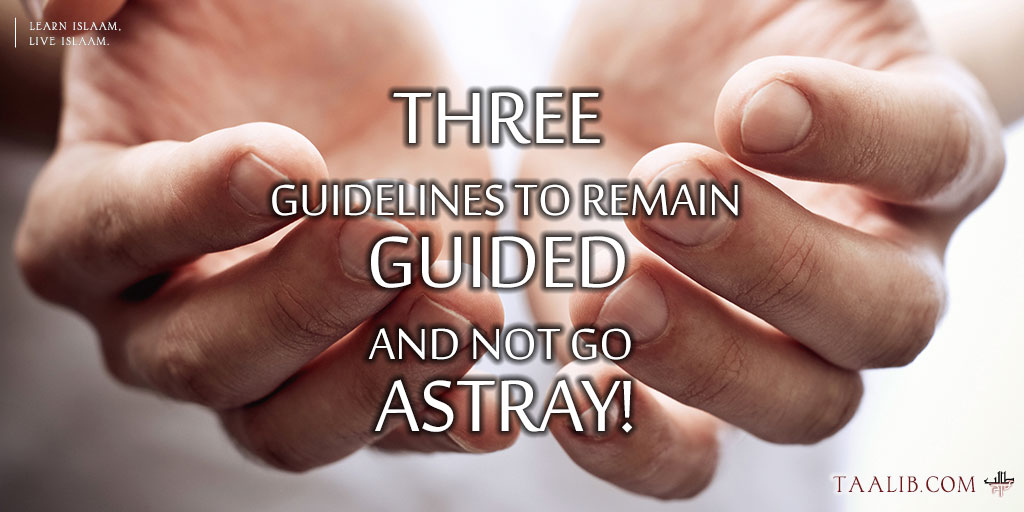 Question: What are the Sharee’ah guidelines which enable the Muslim to preserve his adherence to Islaam, to hold closely to the methodology of the first three generations of believers such that he avoids straying from it, and protects him from being influenced by foreign ideologies of misguidance?

Answer: Those Sharee’ah guidelines should be understood by way of all the statements which have proceeded this question.

That being: firstly, that an individual always refers back to the people of knowledge and insight in the religion; learning from them and seeking their assessment and opinion regarding ideas and concepts he may have wandering in his mind which may eventually lead to some harm.

To carefully consider matters, avoiding hastiness, and to avoid rashness in judging people. Instead, what is required upon you is verification. Allaah the Exalted says, ﴾ O you who believe! If a rebellious evil person comes to you with a news, verify it, lest you harm people in ignorance, and afterwards you become regretful to what you have done. ﴿-(Surah al-Hujuraat: 6) And Allaah, the Most Perfect, the Most High says, ﴾ O you who believe! When you go to fight in the cause of Allaah, verify the truth, and say not to anyone who greets you by embracing Islaam: “You are not a believer”; seeking the passing goods of the worldly life. There are much more profits and bounties with Allaah. Even as he is now, so were you yourselves before till Allaah conferred on you His Favors, therefore, be cautious in discrimination. Allaah is Ever Well Aware of what you do. ﴿-(Surah an-Nisa’ 94). We explain this as meaning: verify that which you are informed of by others.

Once you have verified a situation, then approach the matter in a way which ensures its rectification, not in ways that are harsh and severe, or in ways which may cause further disorder or increase confusion. The Prophet, may Allaah’s praise and salutations be upon him, said, { Facilitate things for people, and do not make it hard for them.}- 1  He also said, { You have been sent to make things easy and not to make them difficult }- 2  Additionally, he said to some of the noblest of his Companions, { Some of you make people dislike good deeds. So whoever among you leads the people in prayer should shorten it because among them are the weak, the old and the needy. }- 3  So in all circumstances, these matters are resolved through wisdom and careful consideration. They are not rectified by anyone and everyone placing themselves into the matter or situation while not having the proper way of dealing with and approaching them.

All of this is recorded in their biographies and life histories, as well as in the narrations and historical accounts of those who came before us of the people of goodness, the people of uprightness and truthfulness. Allaah, the Most Exalted, says, ﴾ Indeed in their stories, there is a lesson for men of understanding. ﴿-(Surah Yusuf: 111)

Consider that the Muslim individual is but one person from within the Muslim Ummah; however, the Muslim Ummah is every Muslim from the emergence of Islaam until the establishment of the Hour of Judgment. This is the entire Ummah. So the Muslim must refer to our righteous predecessors from the first generations and their narrations and accounts of their circumstances; to see how they rectified their affairs, and their guidance in such matters, so that you follow and proceed upon their path and example. Do not turn towards the statements of those who are hasty, nor the ignorant assertions of those individuals who lacking sound judgment incite and merely stir up the people heedlessly.

As today, many writings, lectures, and articles stem from ignorance of the Sharee’ah issues and only inflame the people’s emotions. They direct and encourage the people towards matters which neither Allaah nor His Messenger, may Allaah’s praise and salutations be upon him, commanded them. Even if this originates from a good or sincere intention, what is given true consideration of worth and significance is that which actually stands as correct and true; with the truth always being that which is agrees with the Book of Allaah and the Sunnah, as understood by the first generations of Muslims. As the people in general, except for the Messenger of Allaah, may Allaah’s praise and salutations be upon him, sometimes they are wrong and sometimes they are correct. Therefore, accept what is correct from them and abandon every mistake or error. 4

The short URL of the present article is: https://taalib.com/LuShR
Tags: advicescholarsguidelines
ShareTweetPin 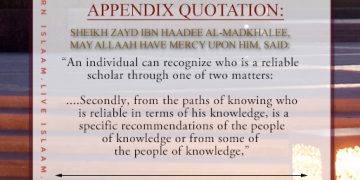 Sheikh Zayd Ibn Haadee al-Madkhalee, may Allaah have mercy upon him, said: "An individual can recognize who is a reliable...