The Proper Way of Speaking About the Scholars 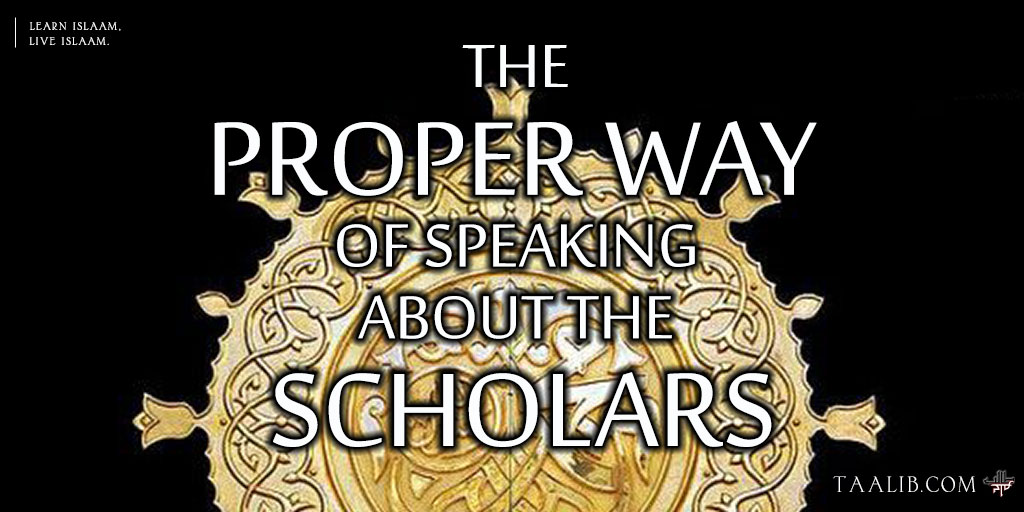 Imam at-Tahaawee, may Allaah have mercy upon him, stated in his famous work,

And the scholars of the first righteous generations, as well as those who came after them from the succeeding people of goodness, adherence to the transmitted sources, understanding and consideration in the religion; they should not be mentioned except in a good and pleasing way, and the one who mentions them in a bad or evil way then he is not upon the proper path.”

“In this sentence from this blessed text explaining the correct beliefs, at-Tahaawee affirms and acknowledges the methodology of the people of the Sunnah and the Jama’ah in dealing with the people of knowledge who are from those who follow transmitted knowledge and have sound understanding in the religion. As he stated, ‘they should not be mentioned except in a good and pleasing way’. This is due to the fact that they are those who transmit the Sharee’ah, because they are those who issue the essential rulings of the Sharee’ah, because they are the ones who clarify to the people the meaning of the statements of Allaah, the Most Glorified and the Most Exalted, in His Book, and the meaning of the narrations of the Prophet, may Allaah’s praise and salutations be upon him.

The Ones Who Defend The Religion

Indeed, they are the ones who defend the religion and protect it by establishing what are the authentic sound beliefs and establishing the authority of the Sunnah of the Prophet, may Allaah’s praise and salutations be upon him. They reject those fabricated narrations, and those false and rejected narrations which are wrongly attributed to the Prophet, may Allaah’s praise and salutations be upon him. Therefore they are the guardians of this knowledge based, preserved Sharee’ah. It is because of this that the scholars stand as the inheritors of the Prophets. As the Prophets did not leave a financial inheritance that consists of dinars or dirhams, rather they only left knowledge. And those who first preserved this knowledge were the Companions, may Allaah be pleased with them all, and then those who succeeded them of the scholars of the next generation, and then the scholars of the third succeeding generation from the people of hadeeth and understanding of the religion.

So in regard to them, the methodology of the people of the Sunnah and the Jama’ah is to mention all of their scholars in a good and pleasing way in order that we do not act in an offensive or improper way with any scholar from among the acknowledged scholars, neither from the people of hadeeth, nor from the people of understanding of the religion. Rather we mention them with goodness and in a good and pleasing way, not speaking about them with evil. Hoping that in those conclusions that those scholars are mistaken, in which they arrived at through their striving to independently reach the truth, they will receive a reward and recompense, yet knowing that a mistake should not be clung to by the one who fell into it….

…And there will come later, if Allaah so wills, a separate discussion explaining that defaming and speaking against the scholars in reality returns in general to being an act of slandering the carriers and preservers of the Sharee’ah, and consequently reflects a weakness in the person it originates from in their love of the Sharee’ah of Islaam. Because in the case of such individuals, the people of knowledge do not actually hold a high rank or an elevated position with them. Therefore they consequently have doubts regarding what these scholars have transmitted of the religion and what matters they have preserved from the Sharee’ah. Such that they then proceed to independently interpret and understand matters according to their own desires and the false opinions. Thereafter they no longer stand as those who generally refer to the people of knowledge in the problems that confront the general people, such that they inevitably come to stand as separated, and lacking that which connected them to the very foundation of faith.

The short URL of the present article is: https://taalib.com/dN9He
Tags: knowledgemannersscholars
ShareTweetPin 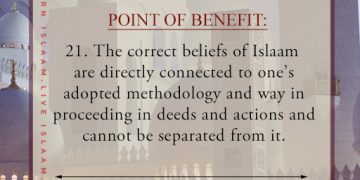 Point of Benefit 21. The correct beliefs of Islaam are directly connected to one's adopted methodology and way in proceeding...

‘Usul as-Sunnah’ Book 1 (The Meaning Of ‘Aqeedah Or Beliefs) – The inseparable connection between ‘aqeedah and Sharee’ah….