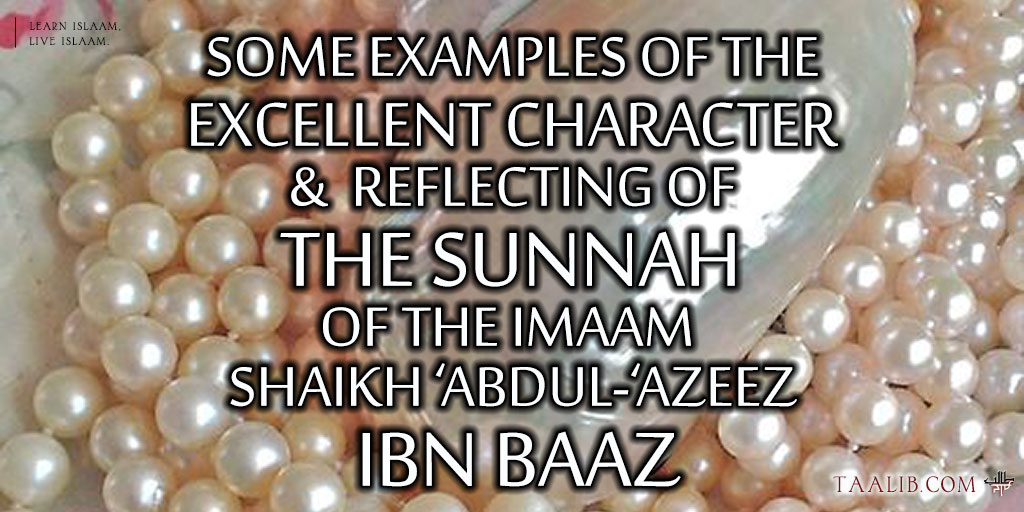 The Shaikh, may Allaah have mercy upon him, was extremely concerned with reviving the Sunnah. Anyone who sat with him in his house or his class while ignoring something of the Sunnah would be moved when they saw the Shaikh’s perseverance and persistence in implementing it. Anyone who saw or heard of this would be affected by it. The following are some of these Sunnahs that many people ignore. but he practiced:

1. The Shaikh would stop speaking if the Adhaan was called, whether he was speaking on the phone or to those around him. He would do this in order to be free to listen to and repeated after the Mu’adhin. Just as Al-Hafidh Ibn Hajar mentioned in Al-Fath, on the authority of Ibn Jurayj, may Allaah have mercy upon him, that he said, “I was told that the people used to be silent for the Adhaan as they were silent when the Qur’aan was recited, and the Mu’adhin woud not say anything except that they repeated, saying it as well.” 2

30 Days of Rectification- Day 2: What should I do, as my society has a great deal wrongdoing and sinning?

2. Sa’d Ad-Dawud (The head of the Shaikh’s private bodyguards) said, “I served the Shaikh for eleven years and I learned much from his actions and implementations.” He then goes on to mention an example which has to do with putting on the right shoe.

He said, “Once, when the people were crowding the Shaikh after he had given a lecture, many questioners were coming, and the people were bearing down upon him, I purposely put his left sandal by his left foot. He lifted his right foot and searched for his right shoe. I put the left one down again, but the Shaikh searched for the right one. For the third time, I saw the Shaykh’s left foot feeling his left sandal, but he kept searching for the right sandal in order to put it on first.”

4. The Shaikh would also start with the right when putting on his cloak.

5. The Sunnah of praying two Raka’ahs when arriving after traveling. Shaikh Abdur-Rahmaan Ibn Jalaal said, “ The Sheikh came to Dalam after ‘Asr on Thursday, in Shabaan, the year 1357 H, and was received by the governor of Dalam, may Allaah have mercy on him, some important people, and many people. When the Shaikh arrived and got out of his car, the governor invited him to take coffee. The sheikh replied, “Where is the masjid, show me the masjid.” Then he prayed two Raka’ahs, and he remained steadfast on this Sunnah until his death, may Allaah have mercy on him.

6. He always licked his fingers after eating, because of the Hadeeth, { If one of you eats then he should not wipe his hand on a napkin until he has licked it.} 3

7. Shaikh Salaah, may Allaah reward him, the one who cared for the Shaikh’s library , told me that when the Shaikh led the Fajr prayers on Jumu’ah, He would recite Surat As-Sajdah and Surat Al-Insaan. 4

He said: “Because it has recently come from its Lord, the Most High.”} 5

And in the book, ‘Akhlaaq An-Nabi’ 6  by Abi Ash-Shaikh, narrated from Abi Hurairah, that he said, “The Messenger of Allaah, may Allaah’s praise and salutations be upon him, and his companions would uncover their heads when the first drop fell from the sky in that year, and the Messenger of Allaah, may Allaah praise and salutations be upon him would say, { It is the most recent from our Lord, and the most greatly blessed.}

10. It has reached me that once someone gave him a gift, and gave him a lot; among other things, some scent was included. The Shaikh took the scent, and returned the rest, because of the hadeeth related by Anas: { The Prophet, may Allaah’s praise and salutations be upon him, would not refuse scent.} 8

11. When he traveled, he would try to go on a Thursday, because of that which is reported about the Prophet, may Allaah’s praise and salutations be upon him, in Bukhaari. 9 The Shaikh, may Allaah have mercy on him, last traveled in this world on a Thursday.

12. From the accounts of perseverance of the Shaikh in reviving the Sunnahs which many people ignore, is that which was told to me by Shaikh Sulaymaan Al-Hudayb, may Allaah reward him:

Shaikh Sulaymaan says: “I was accompanying our ill brother, and on the thirteenth day we set out and stoned the Aqabah to make up the Eid day, then we went to the Sughraa to beginning making up for the eleventh day. We saw Shaikh Bin Baaz, raising his hands and making du’aa on the right side of the Jamrah. We then went and stoned for the eleventh day, and made du’aa at the Sughraa, then the Wustaa, then the Kubraa. Afterwards we returned and did the same for the twelfth day and then the thirteenth day, and the Shaikh was always in the same spot supplicating.“

13. Also entering into this is the way that the Shaikh would answer questions while using physical actions to clarify to the questioner how it was to be done. The Shaikh, may Allaah have mercy on him, was steadfast in implementing the Sunnah in his actions. Once a questioner asked him about how to wipe over his head, and the Shaykh was in the masjid. The Shaykh removed what was covering his head, and showed him how to wipe over his head with his hands. Another person asked him how to place one’s hands in prayer, so the Shaykh placed his right hand over his left hand and placed them on his chest and said, “Like this.”

Just as Imaam al-Bukhari mentioned: “Chapter: On one who prays with the people, and his only intention by that is to teach them the Prophet’s prayer and his Sunnah.” Then he, Imaam alBukhaari, brings a chain of narration to Maalik Ibn Huwayrith, may Allaah be pleased with him, that he said, “Indeed, I pray with you and I do not do it because of the prayer itself, but because I am praying in the same the way I saw the Prophet, may Allaah’s praise and salutations be upon him, praying.” 10

Examples of his memorization and exactness is how quickly he would remember and mention proofs:

14. I remember once that there was an issue of knowledge which some of the students of knowledge and Shaikhs in Riyaadh differed about, and it was giving salaams to the Imaam after the Salaat.

Some of them said that they had researched this matter, and they did not find any basis for it. Then, Shaikh Ibn Baaz was asked and he replied: “The basis for this is in the two sahih collections of Al-Bukhaari and Muslim, in the story of the repentance of Ka’b Ibn Maalik, may Allaah be pleased with him, when he said:

{I would come to the Prophet, may Allaah’s praise and salutations be upon him, in the place where he had prayed, and give salaams to him, and I would not know if he had returned the salaams to me or not.}” Then he also mentioned the hadeeth about the one who prayed badly, which is also in the Sahihayn. 11

16. Once, I was honored to introduce an open meeting with the Shaikh. Directly before the introduction, I requested from him that he speak about the nature of the universe, because winter was just arriving then. After he agreed, I mentioned in my introduction five or six proofs that I had worked hard to prepare. When I had finished, the Shaikh then brought twice the number of proofs in his own speech.

17. Someone mentioned a statement from one of the people of knowledge, which was: “If we had not been told that the prophethood was sealed, we would have said that Ibn Taymiyyah was a prophet.” This statement was placed before some of the people of knowledge, who went to excessive lengths in refuting it. The same statement was placed before the Shaikh, may Allaah have mercy upon him. He smiled, laughing, and said, (by meaning)

“Yes, that has a basis,” Then he mentioned the hadeeth, {If there was a prophet after me it would have been Umar Ibn Al-Khattaab.} 13

Examples of his verification of news that was transmitted to him

He was an example to be followed, in that the basis with him was that he would think well of the people, and verify if some news about them reached him. This should be the path of every student of knowledge, that he should not believe everything that reaches him, for he is an example, and his words are accepted, and might be taken as from the religion. So it is necessary for the student of knowledge to be careful and to place before his eyes the saying of Allaah the Most High, ﴾O you who believe! If a Faasiq (liar – evil person) comes to you with any news, verify it…﴿ -(Surat al-Hujaraat: 6)”

Once a man entered one of the Shaikh’s sittings, and he smelled like cigarette smoke. Someone came and said to the Shaikh, “Oh Shaikh, this man is a smoker; his clothes have the scent of smoke.” The Shaikh said, “Perhaps he rode with a man who smokes, or he was sitting with someone and that sitting had this effect on him.” This example shows clearly the good suspicion which the Shaikh had for the Muslims.

If someone asked him a question, especially if he transmitted someone else’s words, such as a wife telling what her husband did or vice versa, then the Shaikh would reply with, “If what has been mentioned is in fact true then……”

He was once asked about a man who cured people using the legislated supplications and the questioner mentioned that there were some things he had noticed about him. The Shaikh told him to write down the things he had noticed so that he could inquire about them and make certain of the truth regarding them. 14 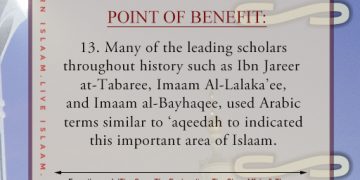