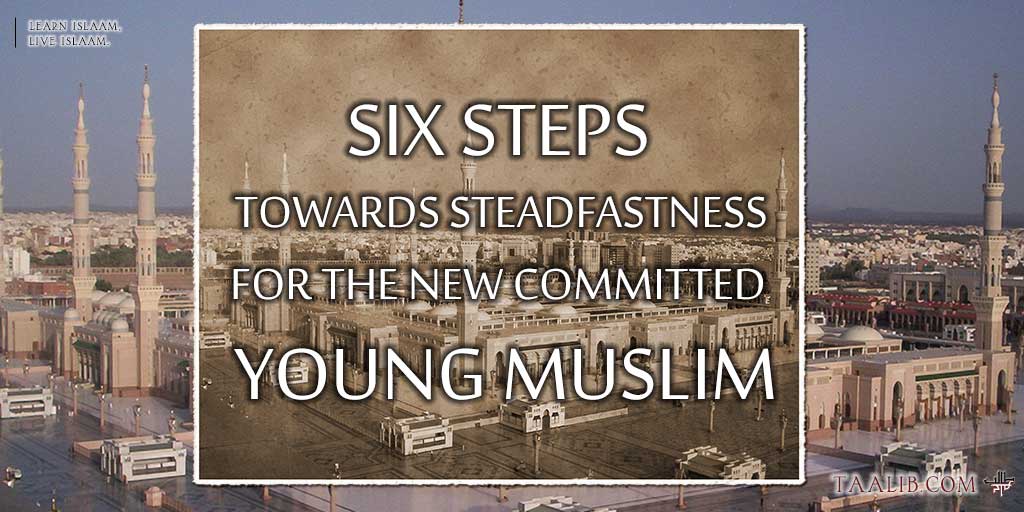 What is your advice to the young Muslim who has just started upon the way of being steadfast in their efforts to be a Muslim?

Our advice to this young Muslim who, if Allaah so wills, is now striving upon this excellent direction and sound way, is:

That he constantly ask Allaah for steadfastness and to ask Him to place him upon what is correct and sound.

that he frequently reads the Qur’aan for the purpose of contemplating it. Because the Qur’aan has a tremendous affect upon the heart, when someone reads it carefully considering and pondering its meaning.

that he strive diligently to hold fast to obeying and fulfilling the commands of the religion, and that he does not start to lean towards being lazy or slacking off. As indeed the Prophet, may the praise and salutations of Allaah be upon him, supplicated to Allaah seeking refuge in Him from both laziness and incapacity to do what is good.

that they strive diligently to take as companions those who are good people in the practice of the religion, and distance themselves from those people of evil ways and bad behavior.

that he always advise himself whenever the inclinations of his soul starts to have some influence upon him. Saying to himself, “Being on the Right way is indeed something needed long term, and the straight road is lengthy.” So that he advises himself sincerely in striving to continue be steadfast in his efforts, as Paradise is certainly surrounded by difficulty things we hate, while Hellfire is certainly surrounded by those things connected to following our many desires and wants.

that he prevents himself from having close friends who are not righteous and good, even if these friends were his friends for a long time previously, meaning from before he committed himself to Islaam. As such a companion and friend will surely have a negative effect upon him. This is the statement of the Messenger of Allaah, may the praise and salutations of Allah be upon him, “The example of the bad companion or associate is that of the blacksmith, either being with him will damage your clothing, or at a minimum you will end up will a bad smell from being with him.” 1

The short URL of the present article is: https://taalib.com/uZ3AQ
Tags: Qur'aansunnahyouth
ShareTweetPin

The following is from a series compiled by our brother Khalil Klopfenstein, may Allaah reward him for this beneficial effort...