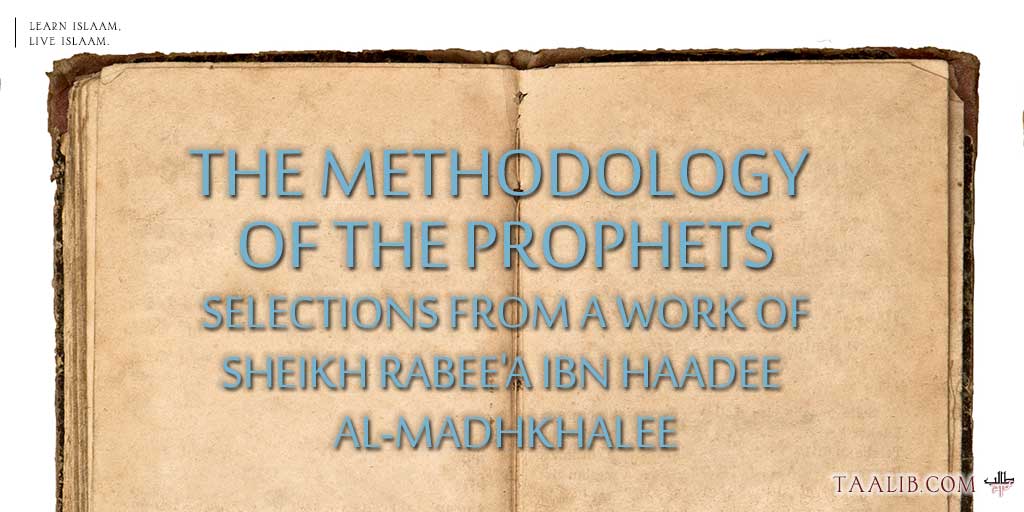 The noble scholar, may Allah preserve him, stated in his work “The Methodology of the Prophets in Calling to Allaah, That is the Way of Wisdom and Intelligence“ 1

The State of the Ummah

“…The ummah of Islaam is in a state of disagreement and divergence in many different areas, both with regard to aqeedah (fundamental beliefs) and other matters besides, and they have taken divergent paths. Then a number of calamities have befallen them as a result of this divergence, and due to the fact that in matters of disagreement they do not refer back for their resolution to the Book of their Lord and the Sunnah of their Prophet. The true extent and seriousness of these calamities is known only to Allaah – the splits in their ranks, the blazing fires of disputes and arguments between them, then the subjugation of the lands of Islaam by the enemies, and their (the disbelievers) desecration of their abodes, their enslavement and the humiliation of the Muslims.”

Many Preoccupied With The Means Instead Of The Goal

“…Then in any case we say to those (referred to) callers: no matter how much noise they make, and no matter how high they raise their voices in the name of Islaam, restrain yourselves because you have left the way prescribed by Allaah and His Straight Path, upon which the Prophets and their followers proceeded in calling to tawheed of Allaah and to making the religion purely for Him. So no matter how much you speak and raise your voices in the name of Islaam, you are still deviating from the methodology of the Prophets which was laid down by Allaah. No matter how much effort you expend, and how much you manage to extend your da’wah and your own methodology, you are still preoccupying yourselves with the means to the exclusion of the goal. Then what use are the means if they merely harm the goal, and they themselves grow at its expense?!

Whoever Sincerely Wishes For Rectification

“…So the deviant leaders and heads of religion are the ones who have corrupted the beliefs of this Ummah, their manners, their worship and their civilization. They have ripped all this to shreds. So why do we flatter them and treat them and their danger lightly, when they are the source of every affliction?!! So over there (on one side) we see the Shee’ah and the Raafidees and their various sects, and the evil heretics and apostates who are hidden amongst them. And over there are the leaders of Sufism and the heads of their many orders (tareeqahs) and their misguided beliefs, unity of everything, the Creator and the created being one, the equality of all religions, that Allaah is incarnate within the creation, their acts of shirk and their innovations, and their deviations which do not stop at any limit. And over there are the heads of the Khawaarij, and the Mu’tazilah, the Murjiah and the Jabariyyah. All of these leaderships have crowned the ummah with trials and misfortunes whose extent is known only to Allaah. Then most of the Muslims are only puppets moved by these ideas just like the froth carried along by the torrent. So whoever sincerely and earnestly wishes to rectify the situation of the Muslims, then let him follow the way of the Prophets and their methodology, and at the head of them the final Prophet, and we have repeatedly made it clear.

“Say, O Muhammad, this is my way, I call to Allaah upon certain knowledge – I, and those who follow me. I declare Allaah free and far removed from all that they associate as partners with Him, and I am free of those who worship anything else along with Him.” -(Soorah Yoosuf:108).”

I Call All Of The Ummah – Its Rulers And Its Ruled

“…Then I call all of the ummah – its rulers and its ruled, its indivduals, sects, and parties, to all have true belief in the all-encompassing authority and sovereignty of Allaah which covers the fundamental matters of the religion and its details, and that they should fully abide by it with regard to the fundamental matters of the religion and its details. I also call the heads of the states, from those who abide generally by the rule and authority of Allaah, and yet are negligent in some areas of practice, I call them to abide by it totally and unrestrictedly in every field, in the matter of ‘aqeedah, and worship, and dealings, and economics, and politics, and with regard to ordering good and forbidding evil, and that they should strive to fight against shirk and innovations, and against sins and against evil – particularly usury and the rest of the major sins which harm the ummah and its manners….

…I also enjoin the scholars of the ummah, and its callers, and parties and groups that they should sincerely advise all of the ummah, its elders and its youth, its males and its females, and unite them upon the Book of Allaah, the Sunnah of his Messenger, and upon the methodology and understanding of the Salalafu-Saalih (the Pious Predecessors), the Companions, the Taabieen and those who followed them upon good, the imaams of guidance, the scholars of fiqh, the scholars of hadeeth and of tafseer, in creed and beliefs, in worship, in manners, in dealings, in economic affairs, and all the other affairs of Islaam and eemaan. Then they should fully comprehend the Sayings of Allaah, the Most High,

“And whoever does not judge by what Allaah has revealed then they are the ones guilty of unbelief.“ (Surah al-Maa”idah:44).

“And whoever does not judge by what Allaah has revealed then they are the transgressors.“-(Surah al-Maa’idah:45).

“And whoever does not judge by what Allaah has revealed then they are the disobedient. “- (Surah al-Maa”idah:47).

The Sayings Of Allaah Apply To All

They should understand that these Sayings of Allaah apply to all individuals, groups, rulers and subjects. So to restrict it to refer it to the rulers alone and not to the people of deviant sects and misguidance, those who do not judge by the Sharee’ah of Allaah in their creed and beliefs, nor in their worship and their behaviour, then this is from ignorance, misguidance and foolishness, since Allaah sent these Aayaat down concerning the Jews at a time when they had not had any state or authority for centuries. He sent these Aayaat down concerning them at a time when He had imposed humiliation and lowliness upon them.” 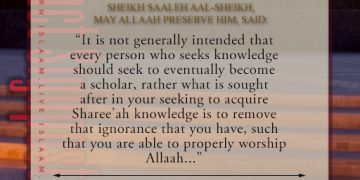 Sheikh Saaleh Aal-Sheikh, may Allaah preserve him, said: "It is not generally intended that every person who seeks knowledge should...