A Short Clarification Regarding the Wearing of Jeans, Resembling the Disbelievers, and Clothing of Fame and Notoriety 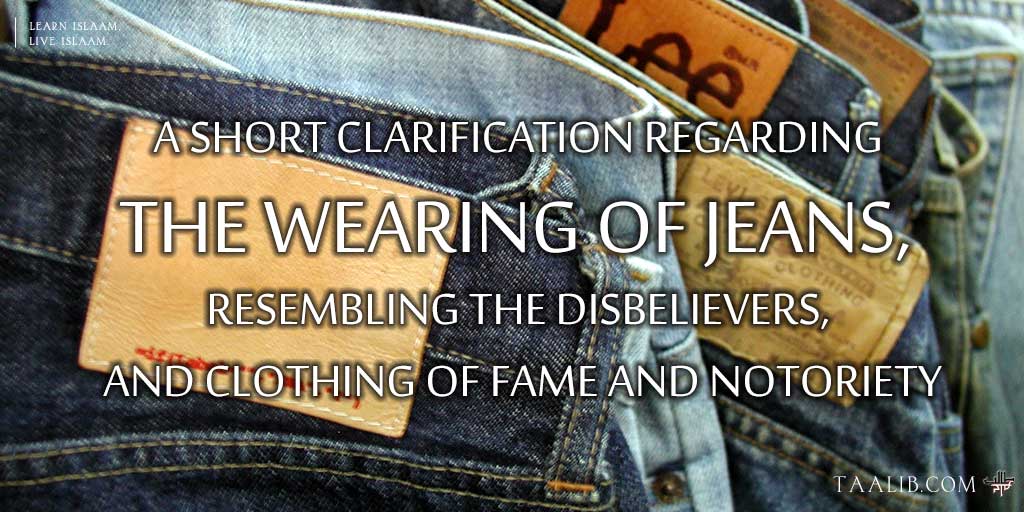 Alhamdulillah, and may His praise and salutations be upon His final prophet and messenger, Muhammad, and upon his family, companions, and those who follow them in righteousness until the Last Day. To Proceed:

This is in response to the questions asked by a sister in one of my classes, alhamdulillah, related to her reading of “My Home, My Path”. In summary, she asked concerning:

1. The ruling regarding the wearing of jeans
2. Resembling the disbelievers in our clothing
3. Wearing clothing of fame and notoriety
4. Are these things applicable in the house as well as outside, and in front of our husbands
5. Is it permissible to dress our children in such clothing when they are young

The Wearing of Jeans

Clothing of Fame and Notoriety

There is much confusion over this category of prohibition.
Concerning this type of clothing, then here is another quote from “My Hijaab, My Path”, page 87:
That the Clothing not be Clothing of Fame or Notoriety
This is whether that which is intended is showing off its high price, or to demonstrate one’s asceticism in order to show off for others; as both of these are prohibited. As it is related from the Messenger of Allaah, may Allaah’s praise and salutations be upon him, in the hadeeth of Ibn ‘Umar, may Allaah be pleased with both him and his father, that he said, {The one who wears a garment of fame in this world, then Allaah will clothe him in a garment of humility on the Day of Resurrection then he will be set aflame in it in the Fire.} (Abu Daawood, Ibn Maajah, Ahmad, and Sheikh al-Albaani has declared it to be hasan, in “al-Hijaab” and “Saheeh Sunan Ibn Maajah”
The Esteemed Scholar ash-Shawkaani, may Allaah have mercy upon him, said, “The hadeeth is a proof for the prohibition of wearing the clothing of fame. This hadeeth is not specific to costly garments. Rather, that may also occur in the one who wears a wretched, inferior garment which differs from the people’s clothing in order to be seen by the people so they are surprised or amazed by his clothing and they believe him. Ibn Raslaan said this.
If it is worn with the intention of gaining notice or fame amongst the people, then there is no difference between the exalted garments or the humble ones, and that which is approved by the people or which differs from them, because the prohibition revolves around the fame or glory, and the significant thing is the intention, even if it does not match the reality. (“Nayl al-Awtaar”)
Ibn Taymiyyah, may Allaah have mercy upon him, said, “Seeking fame or notoriety by the clothing is something hated. And it is something that is higher than the normal clothing or lower than the normal clothing. As the Salaf used to dislike both of these things, both raising and lowering.” (“Majmoo’ al-Fataawa”)
If you read these quotations carefully, you will see that in each one, intention is mentioned. So when we are talking about wearing the clothing of fame and notoriety, it is with the intention of distinguishing ourselves from the people, or making ourselves stand out from amongst them. An example would be wearing blue hijaab when everyone else wears black- with the intention that you be seen and distinguish yourself from the other people. Or, wearing an old ragged garment to show the people that you do not care about this world. If the intention is to be seen by the people, or to distinguish yourself from them, then it falls into this category.
This must be understood, though, in the light of the fact that the clothing can’t fall under any of the other prohibited categories. So, you can’t say that you will wear a white western style wedding dress for your wedding just because you like white, for example. Why? Because first of all it is a clear symbol from the disbelievers, a garment that is known from them specifically, and it even has many connotations and contains symbolism in and of itself. Secondly, it is incredibly expensive and is worn only once, then is put away. Thirdly, it is tight and form-fitting, and thus is not proper to wear in front of other women. And the list can go on, mash’Allaah. The same would be true with wearing a red robe like a Buddhist monk’s, and saying you just like the style- it is a clear symbol for them, and it is something specifically known to them, so it would not be permissible.
So if you are dressing differently from the people simply because you like a different style than is common, and it is clothing which is clearly permissible, then there is no problem with this, according to the people of knowledge. One must check her intention concerning this, as with all things. And Allaah knows best. 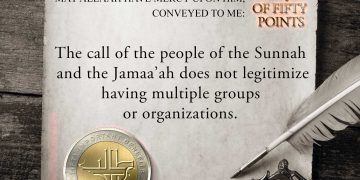 7. The call of the people of the Sunnah and the Jamaa'ah does not legitimize having multiple groups or organizations....