“As-Sheikh Dheya’ ar-Rahman was an instructor along with us at the Islamic University whose origin was India, but he was a naturalized citizen of Saudi Arabia who was teaching in the Islamic University. So some of the people from Jama’at at-Tableegh came to visit him in his house and said to him, “Come out and travel with us brother.” He said to them,

“I am a student of knowledge and I cannot bear to hear people make incorrect statements regarding this religion. As such if I see a mistake I clarify it and indicate it. And if I hear a narration which is in fact weak and unreliable or hear a mistake made in the matters of correct beliefs then I will clarify that.“

“They said, “Ahlan wa sahlan, indeed by Allaah we would benefit from you.”

So they began to say to him, “Oh sheikh perhaps don’t you want to return home?” saying it in a very restrained and subtle way.

But he replied: “I have come out for a period of one week just as we agreed.”

Then they said, “By Allaah it is better that you return home, don’t you see it as better for you to return?” Such that they eventually compelled him to leave them and to return home.

He returned to Medina, and later encountered their leader Sa’ed Ahmad there in the Prophets’ Masjid. So he said upon meeting him,

“By Allaah, Sheikh Sa’eed, a group of young men from your group encountered me and said “Come out with us.” So I went out with them, planning to continue for a period of a week. But I made it a condition upon them that I would mention and indicate any mistake in the religion, weak hadeeth, or similar matters I heard. Yet when I indicated mistakes I encountered in their understanding of the religion they put me out and rejected me, and told me to return home.”

That sheikh replied, “Yes, if you go out with them you can never put forth any objection to what they do. Just like here in the land of tawheed they have forbidden any objections to matters.” 1

“I said to Abu ‘Abdullah Ahmad Ibn Hanbal, If I seen a man from the people of the Sunnah along with a man from the people of innovation in the religion, should I abandon speaking to him?” He replied, “No, first inform him that the one you saw him with was someone involved in innovations in the religion. So if he leaves speaking to him, then you should still speak him. Otherwise consider him the same as you would the one he was speaking to.” As Ibn Mas’ood said, ‘A person is upon the religion of his friend.” 2

may Allaah have mercy upon him said in explanation of this narration,

“This narration from Imaam Ahmad is suitable to implement with regard to those who praise the people of Jama’at at-Tableegh and support and defend them falsely. And the one who has knowledge that the people of Jama’at at-Tableegh are from those who have innovated in the religion, and people of ignorance and misguidance, while he still praises them and falsely defends them, then he is considered to be with them and therefore attached to them. He should be treated in the same manner required for such innovators- meaning hatred for Allaah’s sake, abandonment and disassociation from them.

And as for the one who is ignorant of this group’s actual state and reality, then it is proper that he be informed that they are from the people of innovation, that they are people who are ignorant of the religion and are upon misguidance. And if the one warned does not turn away from praising them and falsely defending them after knowledge about them reaches him, then he also should be treated in the same manner as them.” 3

The short URL of the present article is: https://taalib.com/3avzS
Tags: abandonmentassociationclarificationinnovationmethodologyminhajrefutationsects
ShareTweetPin 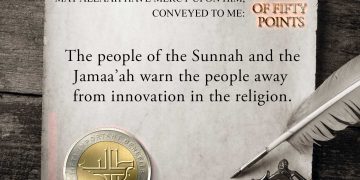 4. The people of the Sunnah and the Jamaa'ah warn the people away from innovation in the religion. While a...