05. Among these groups are those who preoccupy themselves by requesting solely from the governments in Muslim lands that they implement the Islamic system and Sharee’ah without also seeking that from the members of that society who are individually distant from many aspects of Islaam in belief and practice. This call has instigated the rulers against some of the callers to Islaam and been the cause of their harassment, imprisonment, and even killing. Rather, what they should have done is given priority and importance to the cultivation and education of the individuals and the guidance of society in general, before anything else, along with the giving advice to the rulers with wisdom and sound admonitions.

The short URL of the present article is: https://taalib.com/0JVsU
Share1Tweet1Pin 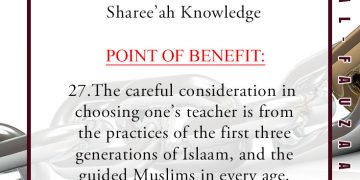 Point of Benefit: 27.The careful consideration in choosing one's teacher is from the practices of the first three generations of...