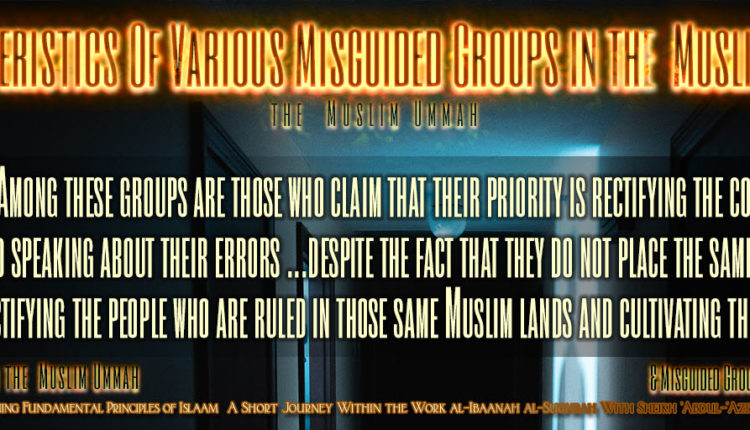 By Abu Sukhailah Last updated Nov 17, 2018
0
Share
This entry is part 4 of 18 in the series 99 Characteristics Of Various Misguided Groups

04. Among these groups are those who claim that their priority is rectifying the corrupt Muslim rulers, and speaking about their errors and transgressions, despite the fact that they do not place the same importance upon rectifying the people who are ruled in those same Muslim lands and cultivating them upon Islaam. They are also those whose misguided position towards the Muslim rulers present today is that they are all disbelievers without any exception, failing to distinguish in a detailed manner between this nation and that nation. They see no difference between the land of Saudi Arabia and other nations but hold in their view that all of these governments are only agents of the West and those who secretly conspire against Islaam. Any government who puts forth any action or endeavor which includes something of giving victory to Islaam then they claim this is only an act of hypocrisy and part of the plotting against the Muslims. The reason for this perspective is because they are students of, and had been raised upon works of, speculative thought and ideas of “Islamic” thinkers.
Their basic position is that of having an evil suspicion of all the rulers generally, while refusing to consider the outward actions of the rulers as valid, despite this being the methodology of the people of the Sunnah. And some of them hold that the only acceptable way is to overthrow the rulers, not to work towards their rectification. This is because as a false fundamental premise they do not believe in the validity of the oath of allegiance given to the Muslim ruler. For they wrongly believe that implementing any man-made laws, even partially to any degree, within a Muslim nation is major disbelief which takes you outside of Islam. This is simply because they have turned away from the established guidelines of the scholars regarding establishing what is disbelief in Islaam.
Similarly they wrongly view that any cooperation with the disbelievers, even in those matters which do not consist of disbelief as held by the people of the Sunnah, is still major disbelief which takes one outside of Islaam. They also hold that revolting against the unjust ruler is permissible even when it is not clearly established that he has committed open clear disbelief- if there is, as they claim, a possible benefit for the Muslims in doing so. As such they have reached a level of severe extremism in this issue. And we ask Allaah for health and well-being.