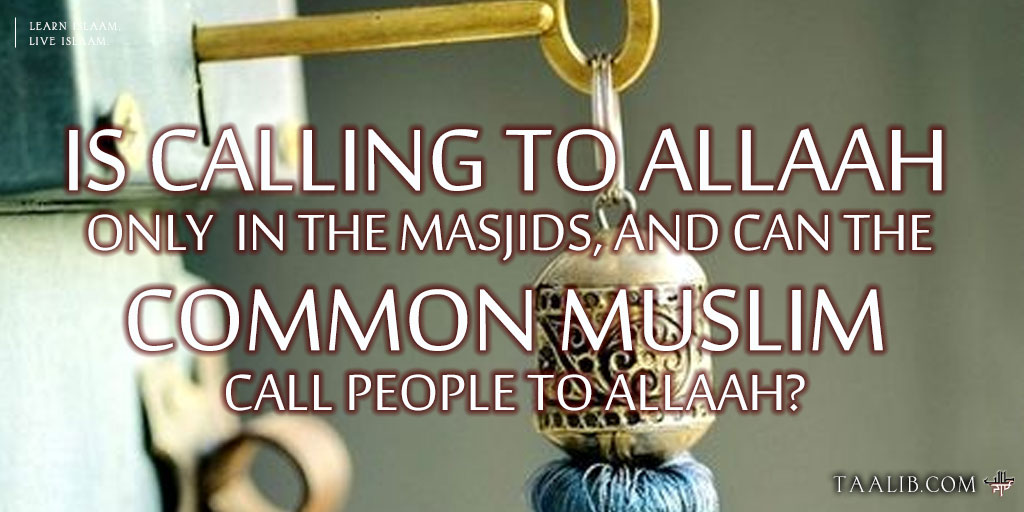 Imaam Ibn Baaz, may Allaah have mercy upon him, was asked about this important issue for every general Muslim who wants goodness and a reward from Allaah – meaning can I call to Allaah personally? Are there any boundaries or restrictions for someone striving to adhere to the guidance of the Sunnah in relation to giving da’wah? 1

“In the name of Allaah, all praise is due to Allaah. Calling to Allaah is not limited masjids only. There are clearly other locations and means that are also related to it. There is no doubt that the masjids hold opportunities for calling to Allaah, such as during the day of Jumu’ah sermon, and other sermons, and preaching around the times of the prayers, and circles of learning. So the masjid is the foundation for the spreading of knowledge and the religion. However, calling to Allaah is not restricted to the masjid alone.

The caller to Allaah also invites in places other than the masjids, such as at any suitable gatherings as well as at casual gatherings. So the believers should seize the opportunities to call to Allaah by way of the different forms of modern media, and also by means of written works. All of these are from the ways of calling to Allaah. The intelligent person seizes the opportunities at every time and place where it is possible to call and invite, putting forth as much effort as he is able in calling to Allaah with wisdom, good speech, and excellent behavior.”

Similarly Sheikh Muhammad Ibn Saaleh al-‘Utheimeen, may Allaah have mercy upon him, was also asked a similar question which applies to many Muslims around the world who are not fluent in Arabic and have not studied our religion at a more extensive or advanced level: 2

I am a young man who wants to be a caller to Allaah, but I do not possess the proper manners necessary for this. Is the publishing and distribution of beneficial Islamic books or an Islamic tapes sufficient for this? Please advise me, may Allaah reward you with good.

“Yes, there is no doubt that if a person does not have the ability to call to Allaah as an individual, then it is certainly possible for him to call to Allaah through the distribution of beneficial books and tapes. However, because this is being done on the basis of, or because of his not having the ability to call to Allaah as an individual, then he should not distribute books or tapes except after presenting them for examination to a student of knowledge who would be aware of what might be in them from mistakes of errors. This is in order to prevent that person from distributing material that contains mistakes when he has not been advised or become aware of this. Additionally from the methods of calling to Allaah is to come to agreement with a student of knowledge that he produce material that invites to that which is beneficial and good, and that you pay for the expenses of that effort.”

Yet we also know that importance of remembering that certain matters of actions done for the pleasure of Allaah and certain endeavors in Islaam are for the scholars to undertake. But what is the balance and what should our focus be? Sheikh Saaleh Fauzaan al-Fauzaan, may Allaah preserve him below helps us understand the boundaries and connection between these different areas of seeking goodness. 3

“This is not a misconception, but is in fact a reality. The call to Allaah cannot be established except through those who are scholars. And I state this. Yet, certainly there are clear issues which every person understands. As such, every individual should enjoin the good and forbid wrongdoing according to the level of his understanding. Such that he instructs and orders the members of his household to perform the ritual daily prayers and other matters that are clear and well known.

So in relation to the common person, that which it is required from him to endeavor upon is that he commands the members of his household-as well as others -with the proper performance of the ritual prayers, the obligatory charity, with generally striving to obey Allaah, and to stay away from sins and transgressions, and that he purify and cleanse his home from disobedience, and that he educate and cultivate his children upon the obedience of Allaah’s commands. This is what is required from him, even if he is a general person. As these types of matters are from that which is understood by every single person. This is something which is clear and apparent.

But as for the matters of putting forth rulings and judgments regarding matters in the religion, or entering into clarifying issues of what is permissible and what is forbidden, or explaining what is considered associating others in the worship due to Allaah and what is properly worshiping Him alone without any partner- then indeed these are matters which cannot be established except by the scholars” 4

The short URL of the present article is: https://taalib.com/2UoyF
Tags: da'wahmasjidminhaj
ShareTweetPin 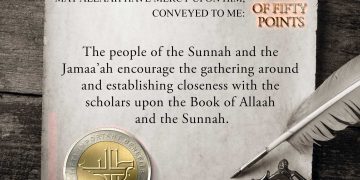 6. The people of the Sunnah and the Jamaa'ah encourage the gathering around and establishing closeness with the scholars upon...