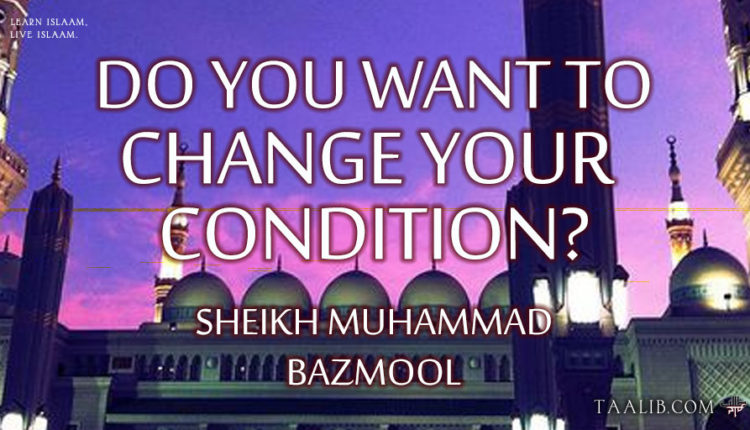 Do You Want To Change Your Condition?

The Steps To Change The Situation You Are Living In1

This is an issue for which Allah has provided us with direction. He said, (That is because Allah would not change a favor which He had bestowed upon a people until they change what is within themselves. And indeed, Allah is Hearing and Knowing) -(al-Anfaal 53).

And He also said, (For each one are successive [angels] before and behind him who protect him by the decree of Allah. Indeed, Allah will not change the condition of a people until they change what is in themselves. And when Allah intends for a people ill, there is no repelling it. And there is not for them besides Him any patron) -(al-Ra’d 11).

And the steps to bring about change are as follows:

-Begin by changing yourself, by inciting yourself towards being obedient to Allah. And this is something which requires knowledge of the sharee’ah.

-Staying away from the things which would cause splitting and enmity among you, and instead being one single ummah. (And He brought together their hearts. If you had spent all that is in the earth, you could not have brought their hearts together) -(al-Anfaal 63). Not avoiding these things leads to splintering, weakness and failure. Allah said, (And obey Allah and His Messenger, and do not dispute and [thus] lose courage and [then] your strength would depart; and be patient. Indeed, Allah is with the patient) -(al-Anfaal 46).

-Enjoin the good and forbid evil. Do this with gentleness, wisdom, knowledge, forbearance, and patience. Allah said, (You are the best nation produced [as an example] for mankind. You enjoin what is right and forbid what is wrong and believe in Allah. If only the People of the Scripture had believed, it would have been better for them. Among them are believers, but most of them are defiantly disobedient) -(Aal ‘Imraan 110).

These are the steps to take towards change. So take these steps beginning with yourself, and those closest to you and then those next nearest, so that the path you take may be based upon the guidance of sharee’ah knowledge. And hold fast to the nurturing guidance of the scholars. Follow what the pious predecessors of Ahl al-Sunnah wa’l-Jamaa’ah were upon, and be cautious of innovations and those who practice them.

Be warned of the people of misguidance, those who promote the abandonment of listening to and obeying the rulers. And be warned against separating from the Jamaa’ah, such that you are not connected to them and they are not connected with you. And Allah is the grantor of success.